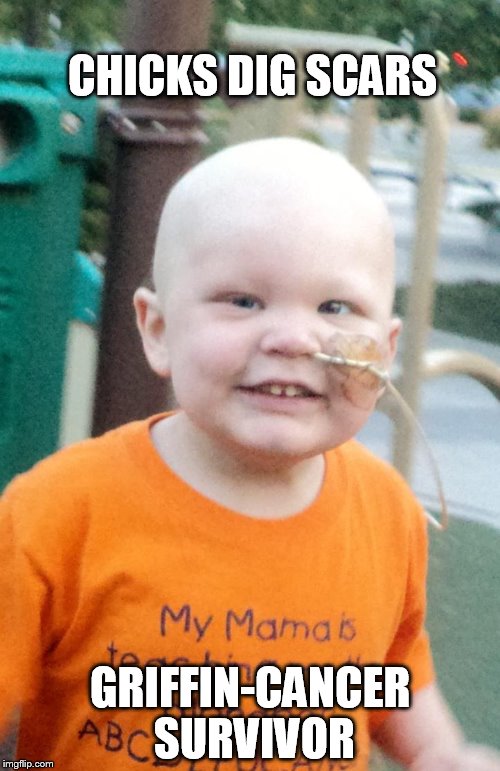 Sorry about the VERY late blog update, somehow this got lost in the shuffle, but I thought I would share it anyway!

These are battle scars. As a relatively healthy four year old, these scars to do not slow him down but I wonder how he will hold up later on in life?
Because he had radiation directly to his face, he is missing an eyebrow on that side, he also wears glasses because he had cataract surgery to correct what radiation had done to his eye. They say his bones will grow slower on that side. His face will be different sizes. I wonder if anyone will notice? Will kids be mean? Will my son wear these scars as badges of honour? Or will they remind him of tough times and shrink like a wallflower?
Every now and then, I wish I could peek into the future, see what the future in like for my Cancer kid. Will he be a cancer awareness leader? Will he continue to walk the fundraisers and be the face of children’s hospitals and Cancer charities? Will he be proud of the things he has accomplished? Or will all this take its toll on him? Will the kids notice his differences? Will he be teased for his scars? His missing eyebrow and lack of balance? He cannot run as fast as the other kids, he had muscle loss and nerve damage from the chemo. This also effects his balance and his confidence as he tries to play with other kids. He is not as confident as the others his age. Will he be picked last for the baseball teams? Will they see the implant in his eye and be freaked out? Will they see the deep red scar on his chest and shrink away in horror?
I wish I could have an idea so I can prepare him for the future, but as any Mum will say, I guess I will just have to wait, and continue to watch him run around the yard. Tripping over his own feet, going much slower than the rest of the kids, but grinning ear to ear. He is happy, and as a Mum, that’s my job, the rest? I will worry about as it comes…
Hug your babies tight tonight

Life living with, through and after Cancer from a Parent’s point of view.